We have a Wii Fit!

I thought I'd never see another one after I bought two at Meijer last Friday (alas, they were for my mom and grandma, not me) and then tried unsuccessfully to buy one yesterday. I felt very defeated this morning (and also probably homesick). But on the way home from work, the gods smiled down on me and sent a Wii Fit to WalMart to be guarded by a very nice employee who kept it for me in the five minutes it took me to speed there and purchase it.

So for now, my life is totally complete. I can hula hoop away all the extra calories from today. Wii Fit + Biggest Loser = TOTALLY AWESOME RESULTS. Yesss...


Having a bad day?

So, tomorrow is my fifth full day of working at the Press and also my fifth full day of doing The Biggest Loser Cardio Max. I'm pretty psyched about it. I've actually had enough work to stave off delving into the editorial (read: not subscriptions) part of my job. I'm not a numbers person, but I find subscriptions to be pretty easy. The journal I'm going to be working on, however, is a giant mess. In comparison, the subscriptions software mess I'm wading through with some coworkers is a walk in the park compared to this journal. I guess, though, that if it was mind-numbingly easy (like entering zip codes for hours....and hours...) I would hate going to work. As it stands, it's a good job.

Aaaand this weekend is the East Lansing Art Festival. And I signed up for a belly-dancing class. And next weekend is Memorial Day. All that = awesome.

In other news, the brownie bites they sell at Costco are addictive.

My mom is awesome. She invited me to ride my bike while she ran 10+ miles yesterday and we talked about everything. She used to invite me along when I was five. From elementary school through senior year, every time she made my lunch (almost every day for 12 years) she added a note. I think she gets cooler every single year (while I get less cool every year, even going so far as to cry over greeting cards). My mom is awesome. <3


I can ride my bike with no handlebars

When I got home for break on Friday, I decided to ignore my e-mail. The result? Even more happiness. I'm really going to have to do this more often.

In the intervening time, I've been catching up on my guilty pleasure game from Christmas (The Sims 2 Castaways, compliments of my brother), doing yardwork (?) and going to see such cinematic adventures such as Ironman (it's actually pretty good).

Also, my brother showed me a really cool song, which I consider to be a direct contribution to my discovery of Flobots--a good band. I think We Are Winning and Handlebars are two standouts that I've heard so far. 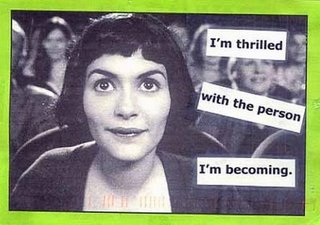 I'm so excited for this summer and next year.